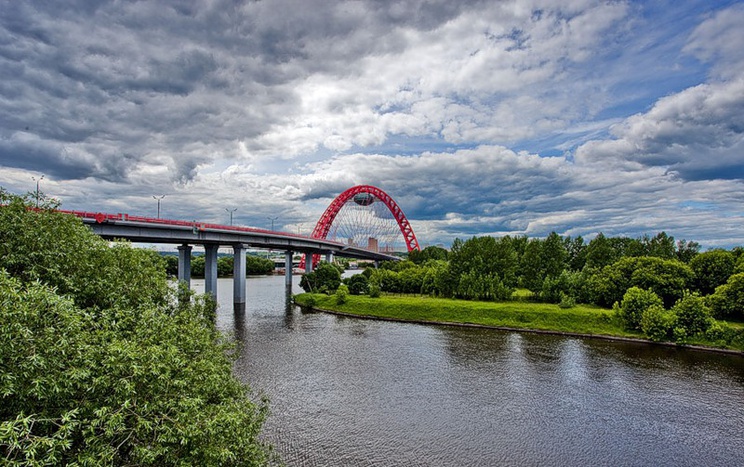 The protected natural area Serebryany Bor ('Silver Forest') is one of the most popular attractions among Muscovites.
It is not only a famous pine forest but also a place related to the great Russian history. There were times when Tsar Alexey Mikhailovich used to be leading falconary in this area. Later, according to legend, after noticing beautiful pines covered with frost, the Empress Ekaterina II has given this place a name 'Silver Forest'.
The forest extends over 3,29 km2 and is located in the bend of Moskva-River on an artificial island which is linked to the city by Khoroshevsky bridge.
Serebryany Bor has around 100 species of animals and you can easily find squirrels, hedgehogs, rabbits and ermines here. Black ferrets and foxes come to the forest along the crust of ice in winter time. As for the fish, silver crucians, breams and pikes breed and seek for food right here at the shore. Even the spieces listed in Red Book can be found here, such as burbot, catfish, ide and dace. While walking along the spectacular paths you may find  comfortable aviaries for the birds of prey, otters and muscrats. The forest is equipped with houses for ducks, cranes and herons. The most rare bird species that can be found in Serebryany Bor are reed, swallow, falcon, hawk.

Among 400 forms of plant life 22 species are listed in the Red Books of Moscow city and Moscow region. Starting from the beginning of summer the beauty of the centuries-old forest is complemented by marvelous butterflies fluttering around. Mother-of-pearl butterflies and Machaons flit from flower to flower, enhancing the fabulous atmosphere.

The mysterious layout of Serebryany Bor includes Bezdonnoe (Bottomless) Lake. They say that the reason it is called Bezdonnoe (Bottomless) is its direct connection to artesian wells.
You may enjoy a  pleasant walk across the lake through the various bridges.
For those who would like to go fishing, Serebryany Bor offers boat and fishing equipment rental. Besides, those who are seeking leisure activities may  easily find a bicycle for rent.

One of the routes along paths of Serebryany Bor would lead you to the river shore, where you would find the biggest city beach №3. You may find a great choice of facilities for various activities along the beach : grills, playground for children, volleyball courts and sports fields. Further along you may find the beach #2. One of the main attractions here is a giant oak that is more than 200 years old.
Zhivopisniy Bridge ('Picturesque Bridge') is a unique cable spanned bridge.  The bridge is about 100 meters height which gives a beautiful view of Krylatsky hills with Olympic rowing canal on one side, and Serebryany Bor with 'Scarlet Sales' residential compound on the other side.  What may really surprise you is what lies underneath Zhivopisniy Bridge. Sections of the bridge do cross the Moscow River but much of the bridge is built along the riverbank unlike other cable spanned bridges. Upon opening the bridge entered the record books as the longest cable spanned bridge in Europe at 1,460 meters. Red color makes it visible from almost everywhere in Moscow.

Every Muscovite or the guest of the city will definitely admire the view because this cable spanned bridge is called 'Picturesque' for a reason. On a sunny day the sunlight flickers along the landscape. And in the night time when the lights are on the arch of the bridge reflects in the mirror surface of the river. All of these make it the best place for a romantic date or an exciting photo shoot.